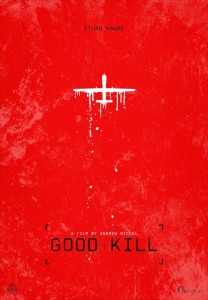 Andrew Niccol also consulted four former drone pilots, who helped recreate the drone’s remote control system, which is typically based on Xbox controllers. „The youngers guys would have a shift in Vegas, then go home and play video games„, says Niccol. „I didn’t put it in because no one would believe it”. The drone’s role as an all-seeing eye echoes 1998’s The Truman Show. „When I wrote it there wasn’t any reality TV. Now there’s condition called Truman Show delusion, where people believe they’re the star of their own reality show”.